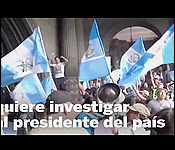 Tonight, there's trouble in Guatemala for president Jimmy Morales. He's moved to expel the head of a U.N.-backed investigative body called CICIG. CICIG is the same body that led the investigation which put Morales's predecessor Otto Perez Molina and his vice president in jail - where they remain today.

Well, now CICIG and Guatemalan Attorney General Thelma Aldana announced on Friday that they would seek to strip President Morales of his immunity from prosecution. The allegation is that he had failed to report anonymous contributions to his campaign.

That was no joke for Jimmy and by Sunday he had ordered his Foreign Minister Carlos Raul Morales to kick the foreign head of CICIG, Ivan Velasquez out of Guatemala. When Carlos Raul refused, he fired him, and did the expulsion himself. So, on Sunday President Morales declared Ivan Velasquez a persona non grata - and that has sparked protests by regular citizens and condemnation from the US, and the UN amongst others.

Presently, Guatemala's constitutional court is blocking the expulsion and Morales has said he will wait and see what the court says. But, Guatemala is on edge - and Belize's Foreign Minister today said Belize should be very careful at this time:..

Jules Vasquez, reporter
"Outsiders are saying that Guatemala risks lurching into chaos because the President has made this very bold move against the head of this UN Agency CICIG and that, well now it is blocked by the Constitutional Court, but they are right on the edge."

"One of the things that has always troubled me as Minister of Foreign Affairs, Jules, is just how fragile the societies are around us."

"So whenever you have these occurrences in our region, particularly in Guatemala it gives me great concern, I will confess that. I think we need to be studiously careful as to how we operate now with the Guatemalans because when they have internal conflicts, they tend to look for scapegoats, and Belize has got to be super-careful to ensure that no attention is turned to us."

Jules Vasquez, reporter
"Will there be a special sort of directive to the security forces to keep things particularly placid in the quote, unquote, adjacency zone."

Reporter
"What bearing if any would these sudden changes in Guatemala have on the move to referendum on either side and this whole particular issue of the territorial dispute being resolved at the ICJ."

Hon. Wilfred Elrington, Minister of Foreign Affairs
"Well we don't know. We would hope that it would not derail the process. But that could happen. Anything is possible. We don't know. We are hoping for the best."

Crisis flares in Guatemala over corruption and organised crime
Constitutional court blocks attempt by president, Jimmy Morales, to expel head of unit investigating campaign financing. Guatemala has fallen into deep political crisis after the president declared the United Nations-backed anti-corruption chief investigating him and his party persona non grata, only to have the expulsion order blocked hours later by the countrys constitutional court. Jimmy Morales, a former comedian who was elected president two years ago after the previous government was toppled by corruption charges, was left fighting for his political survival  and freedom  on Sunday after the failed attempt to oust head of the International Commission against Impunity in Guatemala (CICIG), Iván Velásquez.

Guatemala Has Been Plunged Into Constitutional Crisis Over a U.N. Anti-Graft Probe
Two days after prosecutors announced they would seek to lift Guatemalan President Jimmy Morales' immunity, he ordered the expulsion of the head of a highly praised U.N. anti-corruption commission and plunged into a faceoff with the nation's top court and the international community. It was a stunning reversal for a president whose predecessor had been forced to resign by the same body's investigation two years earlier and who campaigned as the panel's biggest advocate. "Neither corrupt nor a crook" was Morales' campaign slogan.