A Sunday Night of Protests In City and Placencia

A group of protesters took the fight to the steps of the Supreme court last night when they rallied together in Battlefield Park.

It was once again a small number but the protesters, many of whom were Ladie Gillett's biological family, were in fine fighting form.

It all started at Pound Yard and Cherisse Halsall was there to see it.

Belize's City's protest for Laddie got off to a bad start last night when the organizers were told that they wouldn't be allowed to march from Pound yard to Battlefield Park.

A minor setback because they were just as fiery when they got to Belize's historic stomping ground for civil disobedience.

Henry "Pulu Musa" Gillett, Bio-Uncle of the Deceased
"It's lies that the police are saying, the young guy is out 5 minutes after curfew. Curfew is 10:00 o'clock I could be out at 12:00 o'clock all that the police are supposed to do is come get me, take me in and give me a ticket. It only requires a ticket offense not a bullet offense. It's a bullet that they gave a minor."

And that minor's death - now a symbol for chronic police brutality - is now immortalised in a portrait by artist Cadex Herrera.

He's the Belizean artist who last year helped to paint that famous mural of George Floyd, an African American who also died at the hands of police.

Cherisse Halsall:
"Pullu I think one of the reasons these movements catch on so fast in the U.S. is because there is a clear understanding that the police have a prejudice agaisnt black young men. In this country people tends to say the young man black and the police is also black, so it can't be racism, but what about systematic racism exercised by the state do you think your nephew was a victim of that?"

Henry "Pulu Musa" Gillett, Bio-Uncle of the Deceased
"Yes, and that is ignorancy, that is ignorancy because at the end of the day a police cant be doing these things. I have my right to voice my opinion, I'm entitled to it."

And, similarly, down south in Placencia, the quiet community where this terrible crime took place, outrage remained palpable. We heard from two of the organizers who brought community members together for a candle light vigil and peaceful protest outside the Placencia police station

Amanda Berry, Protest Organizer
"The main purpose of tonight's event was to get everyone together and to become involved. Tonight is really just a stepping stone we are hoping to make an impact. We also want to express to the placencia police department that we will not be taking this lightly. We put them together based on our knowledge and experience as placencia citizens along with the outcrys that we heard from our own community."

And it seems it didn't take much coaxing to bring out these residents because each outraged speech seemed more powerful than the last.

"We want justice it's enough. We don't see justice in this country. This is a kid that has been killed it's not the first time this has happened in Belize and we want this to be ending. We want this to be the last one."

Walter Garbutt, Placencia Tour and Fishing Guide
"I don't want to bring black or white in it but i've never heard of a white person, a tourist , get shot anywhere so race is definitely a part of it."

Aaron Krohn, Yoga Instructor, Naia Resort
"Police are not 007 they don't have any license to kill. No man, when people act this way this is completely against the police code of conduct, people have to be held accountable."

"There will be no justice until there is justice for Laddie. And for every other kid that has been pushed down, murdered or beaten by the police."

And while the community may have stalled to stand up, Sunday's protest organizers say they are far from finished and that they plan to press on.

Lyra Spang, Protest organizer
"We do actually have future steps in mind, we know there will be the court date in October, we will be there and we hope there will be many, many more people that are at this little gathering, we had great turnout but I expect even more for the next event and this is not something we are just doing one night and then we forget and move on because what happened to Laddie is just one awful example of a problem that is countrywide and that is systemic and the only way to resolve that is police reform. So we are here to grieve Laddie and to express our condolences to his family but we are also here to demand police reform."

And they're not letting up in Belize city either. Staging another protest this evening to speak out for the injustice done to Laddie in the hope that his cruel and unjustified death should be the last of its kind.

Belize City Protest: Justice for Laddie and Others Victims 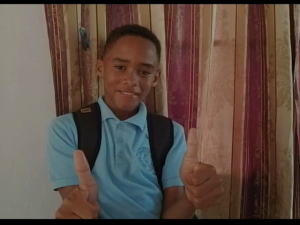 The postmortem examination conducted on Laddie Bryson Gillett who was killed in Placencia on July fourteenth has determined the cause of death to be hypervolemic shock, internal exsanguinations due to a single gun wound to the chest. Laddies death has therefore been ruled as a homicide. One doctor clarified with a media house that for autopsy purposes, the chest is considered the entire thorax, including the anterior, posterior, and lateral chest.  Those results were released just before news time. But on Sunday night, family, friends and sympathizers gathered in Belize City to ask that charges be upgraded and send home the message: they want justice for Laddie. Heres a report on the event from Marion Ali.

The chant for justice for Laddie Gillett was made symbolically across from the Supreme Court building, in the Battlefield Park in Belize City on Sunday night. A group of some 25 persons, led by social activist, Moses Sulph and others, implored the Director of Public Prosecutions’ office to upgrade the charge against the boy’s accused killer, Police Corporal Kareem Martinez from manslaughter to that of murder.

We don’t believe that manslaughter should have been the charge. We basically believe that manslaughter is a ticket to freedom.   This is what it is telling me in my mind. My son can be shot in his back, running away and the person who kills him – when my son is gone – the person who murders my son will be given bail which will eventually lead to them possibly getting a suspended sentence or seeing no jail time. 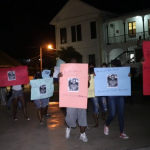 I’m sending this to the D.P.P., whoever she or he is, I don’t know, but please just upgrade the charge to murder: Laddie deserves justice, the same way how Allison Major deserved justice; the same way how Fareed Ahmad deserved justice.  I believe Laddie’s situation was totally atrocious, totally reckless, totally worthless of that officer, and then you get charged fi manslaughter when you never even give a warning shot to this young man. You just aimed at this target. I know for sure they always say give a warning shot. You don’t aim at a fourteen-year-old. What (can) a fourteen-year-old do with his back turned to you? 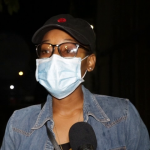 While the protesters lashed out against what they feel is a free ticket for the accused policeman, they are clear that they are not anti-Police, but simply anti-police abuse.  One of the protestors, Auxiliary Nurse Indira Cayetano also criticized Belizeans for not taking their fight further than the social media platforms.

Belizeans will always be Belizeans. They will be this advocate on Faebook but when it comes to stepping out, you can see the small amount of people who want to support and who want this brutality to end.

But the public outrage on social media over the killing and the subsequent charge of manslaughter was also accompanied by accusations against the youth’s biological family who gave him up for adoption as an infant. They are accused now of using his death to make financial gains. Laddie’s mother, Linda Gillett did not want to speak at the rally, but her brother, Henry Pulu Musa Gillett gave his familys side on Sunday.

People di post a lotta stupidness pahn social media but we nuh have time fi follow it up. People wa say weh dehn want.  People di say how my sister tek twenty-five thousand dollars fi her son.  The person deh offer ah some money and ih explain to dehn No! My son is not for sale! I’m doing this because I am in a situation right now but hear what was the agreement. I want a better life for my son’ to the person who ih give ah to and, I want to be a part of my son’s life. The last time my sister see ih son da when ih four years old fi ih birthday. After ih gone back two months after the people dehn tell ah your son is not here; hes in America. When people di holler bout we di use this fi try hustle money. Miss, me forty. Me never see deh money deh eena 40 years. And I could put my head pahn the block, I never yet see my sister, or hear or know she have deh kinda money deh.

He was visiting their community on a family vacation last Wednesday when he was killed, allegedly by a police corporal.  On Sunday night, villagers in Placencia gathered to pay their respects for a young life gone too soon and to air their feelings about rising crime, and police response, in their community.

Among the protestors in Placencia Village were a group of children who held up placards and candles in honor of Laddie Gillett.  The Sunday night protest was organized by former Placencia BTIA Director Ellie Dial, who says she heard the gunshot that killed Laddie.

I heard when it happened, I live in the area. The fact when I woke up the next morning and heard that somebody had been killed, really threw me for a loop. The peninsula is big and there are a lot of police here. I dont know, it s different. Like everywhere else, Placencia is growing. They need more police here. But, they need better trained police. I feel like, obviously that wasnt the way it should have been dealt with.

The protest was held in front of the Placencia police station. Outside the station, officers stood by and sat in golf carts as onlookers of the peaceful protest.

Now the approach, from you get a phone call, is not the same adrenaline rush, it is not the same suspicion, it is not the same reaction that is going to take place. We are approaching a little more aggressive that normal. The situation with that, I guess the officers are doing it broadcastingly with the surroundings that is happening. You see a lot of rude bwai, gang bang, red, and blue hanging out. Pants here, tattoos, we are not discriminating. But, they needed to uplift the security in advance to this. I dont want this to be an example because it is sad. Now, an innocent kid got killed. I want to see what level it will be pertaining to this. I am touched. I had to discipline my daughter for posting an aggressive post towards the police. I beg her please, take it down. That is not the approach. But the mindset that it gives innocent people is tough. 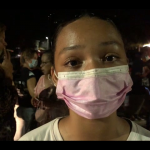 He was above my class. He was very into sports. And just to know that he died made me really sad.

When was the last time you saw him?

Just a few days we were at the river swimming and I cant believe it.

A second protest is scheduled in Placencia for tonight. Reporting for News Five, I am Paul Lopez.