The invasion of predatory lionfish in the Caribbean region poses yet another major threat to coral reef ecosystems -- a new study has found that within a short period after the entry of lionfish into an area, the survival of other reef fishes is slashed by about 80 percent.

A maroon-striped marauder with venomous spikes is rapidly multiplying in the Caribbean's warm waters, swallowing native species, stinging divers and generally wreaking havoc on an ecologically delicate region. The red lionfish, a tropical native of the Indian and Pacific oceans that probably escaped from a Florida fish tank, is showing up everywhere - from the coasts of Cuba and Hispaniola to Little Caribbean Eco reefs, the region's prime destinations for divers.


Wherever it appears, the adaptable predator corners fish and crustaceans up to half its size with its billowy fins and sucks them down in one violent gulp. Research teams observed one lionfish eating 20 small fish in less than 30 minutes.

"This may very well become the most devastating marine invasion in history," said Mark Hixon, an Oregon State University marine ecology expert who compared lionfish to a plague of locusts. "There is probably no way to stop the invasion completely. The threats to coral reefs all over the world were already extreme, and they now have to deal with this alien predator in the Atlantic. These fish eat many other species and they seem to eat constantly."

Marine biologists are seeing it in every habitat: in shallow and deep reefs, off piers and beaches, and perhaps most worrisome, in mangrove thickets that are vital habitats for baby fish. Lionfish are carnivores that can eat other fish up to two-thirds their own length, while they are protected from other predators by long, poisonous spines. Other fish have learned to avoid them but in the Atlantic Ocean, native fish have never seen them before and have no recognition of danger. There, about the only thing that will eat lionfish is another lionfish - they are not only aggressive carnivores, but also cannibals.

Northern Caribbean islands have sounded the alarm, encouraging fishermen to capture lionfish and divers to report them for eradication.

One marine biologist said that he has been stung several times while rounding up lionfish - once badly. "It was so painful, it made me want to cut my own hand off," he said. Marine officials say swimmers will be more at risk as the venomous species overtakes tropical waters along popular Caribbean beaches. Because of their natural defense mechanisms they are afraid of almost no other marine life. And the poison released by their sharp spines can cause extremely painful stings to humans - even leading to fatalities for some people with heart problems or allergic reactions. Researchers are scrambling to figure out what will eat the menacing beauties in their new Caribbean home, experimenting with predators such as sharks, moray eels - and even humans. Hungry sharks typically veer abruptly when researchers try to hand-feed them a lionfish.

"We have gotten (sharks) to successfully eat a lionfish, but it has been a lot of work. Most of our attempts with the moray eel have been unsuccessful," said Andy Dehart of the National Aquarium in Washington.

One predator that will eat lionfish is the grouper; scientists are pinning hopes on the establishment of new ocean reserves to protect grouper from over-fishing. As lionfish colonize more territory in the Caribbean, they feed on grazing fish that keep seaweed from overwhelming coral reefs already buffeted by climate change, pollution and other environmental pressures. If we start losing these smaller reef fish as food to the lionfish ... we could be in a whirlwind for bad things coming to the reef ecosystem.

First, the report... Lad Akins, Director of Special Projects, REEF, is aware of this one and is vetting final details before putting the word out. On December 11th (the day the fish was sighted) from one of Peter Hughes' dive vessels reports arrived to Lad Akins. An instructor (who has significant experience diving in New Guinnea and knows her fish!) found the lionfish about mid-day on the 11th at a site referred to as Doc's Place on the east side of Turneffe. The fish is approx. 8-10cm and was observed in the open at a depth of 85'. They do have photo confirmation of the fish (the director saw the images and confirmed the sighting) and are working on final details before putting the fish into the USGS NAS sightings database.

If anyone is interested REEF also has a lionfish project already planned for Belize in June (13th-20th) aboard Peter Hughes' Sundancer liveaboard. This was originally planned to be an education/awareness project, but it looks like they might be doing more now with this early arrival.

From the Ambergris Today
Posted By: Sandshaker

Yikes...they should nip this problem in the bud. Learn something new every day. Thanks Marty!
Posted By: Marty

The lionfish is a venomous beauty and is a native to the tropical Indo-Pacific seas. The fish is found in the water of Belize with a confirm sighting on December 11th, 2008. How this fish gets to be here in Belize is a rather long story. But to make it short, it was first noted in the water off Florida in 1993, presumably released from someones aquarium. The fish has henceforth been multiplying and spreading northward along the Atlantic coast of the continental US up to Canada. It has also spread along the Caribbean on the eastward land mass. One can view the website below for the spreading of this invasive specie in the Atlantic waters. Studies have been estimating that the lionfish may be in the western Caribbean region by the middle of this year. However, the fish has arrived before projected time or may have been here even earlier as there is a photo taken from Belize presumably dated in 1996!

The lionfish is a carnivore and can devour marine animals that are as big as three-quarter of its own size. They eat by a suction force like a vacuum cleaner. A study has found that the lionfish appetite is so huge that one fish can reduce young juvenile fish population by 79% in five weeks. Imagine what this fish can do to our fish population! Not only can they decimate our fish stock and impact the coral reef ecosystem as a whole. According to scientists from Oregon State University, they can cost the loss of herbivorous fish which sets the stage for seaweeds to potentially overwhelm the reefs and disrupt the delicate ecological balance in which they exist. In addition, our tourism industry that many of us are dependent upon, one way or the other can be significantly impacted. As reports are there that dive and snorkel sites in the Bahamas have been closed because of the wiping out of natural attractions by these venomous gluttons.

We can almost say that we have a lucky star in our constellation called the groupers. Yes, our naturally occurring, native groupers are predators to these unwelcome and venomous beauties. Since they are our one source of defence, we should continue protecting the groupers from overfishing. But will there be a point that the fishes after many bioaccumulation become too toxic to eat? This is a question that maybe after some time we might find out. But for now, we would like to warn the public of the presence of the invasion of lionfish in our water. If they are spotted please help us by capturing or killing it and report to the Belize Audubon Society of your finding by either calling 223-5004 or by email marineparks@belizeaudubon.org.

There are many ways that one can help in the eradication process. One can capture the fish by spearing or netting and then report the incident, or simply report the sighting with time and GPS information of the location of finding. Most importantly is that caution must be taken when handling the fish, as the dorsal and pectoral spines are venomous. The sting deliver pain that is extremely painful, and may cause nausea, breathing difficulties, or in extreme cases to people with heart condition  death. At this point, anti-venom has not been developed for the toxin, but the sting is said to last 15-20 minutes. However, the fish is a fish, and is a food source in other parts of the world and is said to taste like chickens.

Please join in helping us in the eradication program and if spotted inform us of your finding.

These are a beautiful fish in the Red Sea, where I have spent hours watching them eat fish so fast it's like they just disappear. However they need to be killed if found in our waters, whenever, wherever.

Tastes like Chicken - what a surprise!
Posted By: Marty 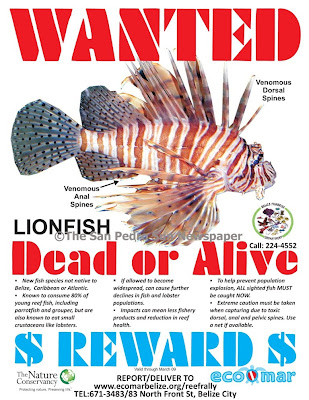 Other efforts to catch the LionFish are being encouraged and several organizations have mounted an educational campaign to alert residents about the lion fish perils. SeaSports Belize for instance, who are a local tour company in Belize City have issued posters of the LionFish which encourages the catching of the species, WANTED dead or alive. Some negative impacts caused by the Lion Fish if allowed to become widespread, can cause further declines in fish and lobster populations. Impacts can mean less fishery products and reduction in reef health. Thus, divers are advised that although the lionfish are a beautiful sight it is just as dangerous and divers are asked to capture it by using a net or pushing it into a bag. Reporting the sighting and its location is the next best thing!

posted by the san pedro sun
Posted By: Marty

AP report on the Lionfish


Night dive in the Red Sea watching Lion fish hunt by the light of dive torches.


Coral Fish Attack Lionfish
Some other fish whose name I don't know is playing with/attacking a Lionfish, a poisonous fish that causes humans to drop unconscious in case of skin contact.

A couple weeks ago we published the reports of the first sighting of the Reef Killer in Belizean waters, particularly at the Turneffe Atoll.
Today we have another reported sighting at the Glovers Reef Atoll. We are sorry to be the bearers of bad news, but we just received a confirmed report of a lionfish sighting at Glovers, stated the email we received here at Ambergris Today.
The Lionfish was sighted by Kitty Luk from Isla Marisol at a dive site called Midway, half way between Southwest Caye and Middle Caye on the east side of Glovers. The fish was 5-6 inches long and was sighted just at the drop off at about 50 feet. According to Kitty her efforts to capture the Lion Fish were unsuccessful and it is still somewhere out there.
This is the third reported sighting of Lionfish in Belize. In late December the Sun Dancer liveaboard sighted and photographed a Lionfish at Turneffe Atoll.