The Peoples National Party on Monday officially signed on to their partys constitution. The historic event for the PNP took place on Ambergris Caye before supporters and sympathizers of the PNP. Full details in Love FM newscast on 98.1 FM.

Wil Maheia on the left, Mike Campbell, and Basilio Mes

On Monday the Peoples National Party made an important accomplishment in the launching of the partys constitution in San Pedro.

While visitors flocked the island for Easter Holiday, the Peoples National Party PNP was busy on Ambergris Caye and on Monday, they officially signed on the partys constitution. The historic event for the PNP took place before supporters and sympathizers of the PNP. Present at the occasion were PNP Leader Wil Maheia and PNP Standard Bearer for Stann Creek West, Basilio Mes. Mahiea spoke to Love News.

Together we put our heads together all weekend and this is something that has been in the working for the past year. Yesterday we finalized it and we signed off on the Constitution for the Peoples National Party. When we launched our party we launched our party in the Maya Mountains in Toledo. One of the main focus about our party is the love for Belize, to have Belize with all its territorial integrity intact. we do things across the country so people can know that we are not a party that is going to focus all its energy in one area like the other parties. Our party is spreading its energy across the country. We want to do different things across the country.

According to Mahiea, the support at the event was overwhelming and says that islanders will see a more permanent presence of the PNP on the Ambergris Caye and Caye Caulker. 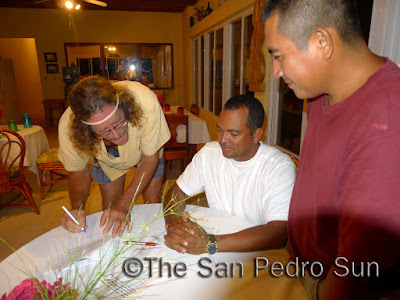 Explains Maheia, “We decided to have this important meeting on Ambergris Caye so that we could, at the same time, announce Mike Campbell’s candidature. We have been working hard on our Constitution and Principles for several months, so this was really just to put the final polish on things.”
“Our Constitution is of course the rules by which our party is run, but more than that, it’s been designed so that free spirited individuals can join our party and be a very active part of it without having to declare that they will put party first before all other considerations. We also wanted to make the party as democratic as possible, with every member having a true voice. We have seen how destructive the old-style party system with its highly centralized control is, and we wanted to avoid that at all costs.”
Maheia goes on to say, “Our Principles enshrine our most important beliefs about the governance of our country. They really speak for themselves. Amongst those beliefs are territorial integrity, the absolute rule of law, an end to corruption, the vital place of education, the building of a free market economy with the support of government, and of course, the preservation of our natural resources to be used wisely for the benefit of all Belizeans, both now and in the future.”