The King of (Belize) Beer

Sorry Budweiser, in Belize you are not king. You are not even prince. Bud (or Bud Lite - America's best selling beer) is just not for sale in Belize. Lucky for all of you, SanPedroScoop is on the case and more than ready to crown the king of Belize beers.

First, let's meet the contestants. Until just a few years ago, these were our only choices. All brewed in Ladyville, Belize by Bowen & Bowen. The prices listed are the average prices at bars in town. 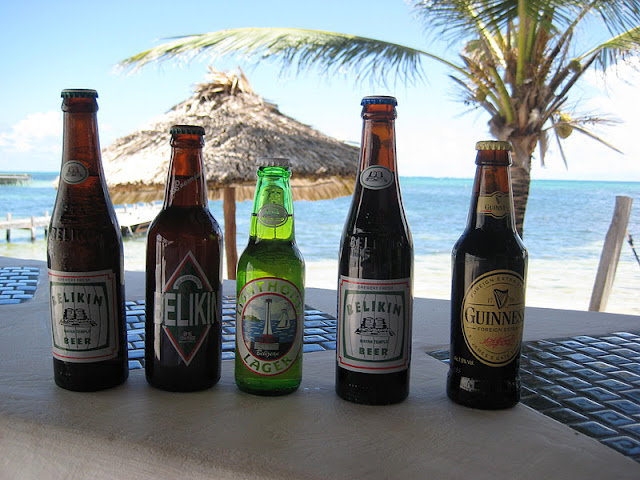 From left to right. (For informational purposes, a bottle of Budweiser is 5.0% alcohol and 12 ounces)

Belikin Premium. $7. 342ml (or 11.5 oz). 4.8% alcohol. Quite recently, Belikin released a new formula. So if you haven't tried it in a while, try it again. It's a bit richer than Regular. Pretty good I think. A few hotels offer only this beer instead of regular in an attempt to seem upscale.

Lighthouse Lager. $5. Green bottle. 237ml (or 8 ounces). 4.2% alcohol. Lighter than Belikin regular in every way. To me, this mini-beer tastes "off" with a bit of a stinky foot aftertaste. Seems like mostly women and British expats gravitate towards it. To be particularly ladylike, some Belizean women drink it with a straw (as they do Smirnoff Ice).

Belikin Stout. $5. Blue top (same bottle as regular). 284ml (or 9.6 ounces). 6.5% alcohol. It is much darker and has a bit of a honey flavor but slightly bitter. Maybe dark chocolate. I think it tastes pretty good. But be careful. This little beer is strong. Don't be fooled into thinking you are drinking just regulars, you might find yourself crawling home. Make a Belizean Black and Tan with stout and regular. It's quite nice.

Guinness. $6. 275ml (9.5 oz) and 7.5% alcohol. Guinness is a holdover from the British days and seems to be preferred by most Belizean males. Dry, bitter and heavy, I cannot think of anything less refreshing on a hot day. Maybe sitting in the sun wrapped in a wool blanket and drinking a hot coffee? Actually...I'd prefer that. Beer snob expats and tourists alike insist it doesn't taste like "real Guinness" but to me, it all just tastes bad.

In 2009, Belize entered into a treaty with CARICOM countries (list at bottom of blog) to lower the taxes on imported liquor. Prices on imported beer have come way down but it is still a couple dollars more than the Belikin regulars. Here are the imports that are for sale at most stores and bars.

Heineken. $6-8. Brewed in St. Lucia. You've all tried this one before. If you are super cool, you drink it from the new cans they are importing. Canned beer is quite the novelty in Belize.

Dragon Stout from Jamaica. $5. 10% ALCOHOL! I had to buy this at the store. It's not served in any bar that I know. It is generally a "beer" one wants to sip out of a paper bag in a dark alley. It tastes like a blend of Guinness and bum wine. Almost like a Thunderbird or Nightrider. It was my first and my last. THIS STUFF IS HORRIBLE. Spill some on your shirt? You'll smell like you've been pumping gas all day.

Red Stripe Regular, Jamaica. $6-10. You've all had it. Cute little barrel bottles but not worth the extra money.

The winner? Best Beer in Belize definitely goes to BELIKIN REGULAR. And I prefer the draft in the small glass. Beer gets really warm rather quickly around here.