The Barrier Reef lies about half a mile off the winward side of the island. It is the longest barrier reef in the Western Hemisphere and the second longest in the world. 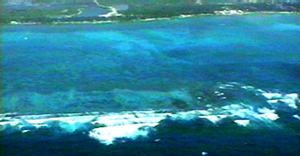 Flying south into Belize, you can see the reef as an unbroken chain of white surf running along the Caribbean coast of the Yucatan Peninsula and continuing south almost the whole length of the country to the Ranguana and Sapodilla Cayes. Inside the reef the water is shallow, with a blue tinge; outside the reef the water is deep and from the air shows a dark royal blue. On very clear days the reef appears as a narrow yellow line dividing the two shades of blue. Only near Ambergris Caye does the reef run so close to a well-populated caye. Here it is an almost so!id wall of magnificent coral formation broken only by narrow channels called "quebradas". Here an observant diver can be kept entertained for hours on end by the unending variety, shapes and colours ofthe tropical coral.

But the reef is more than just a decorative sideshow. Without it the island would not exist for it serves as a natural break-water protecting the beach from erosion by the waves, and sheltering the caye and its inhabitants. The remarkably clear and shallow water inside the reef allows excellent viewing of the fabulous marine life of the area. Rainbow tinged tropical fish, delicate sea fans and majestic coral gardens abound. Outside the reef, the seabed drops sharply in a series of plateau to depths of thousands of feet. Out here in the blue are found the gamefish - mackerel, kingfish, wahoo, tuna, sailfish and marlin.

Although it looks Iike dead stone, the reef is in fact a living wall formed by millions of coral organisms. These coral are carnivorous animals, known as polyps, which eat small sea creatures that float by, capturing them with stinging tentacles. They feed, however, only at night, pulling their tentacles back into the skeleton during the day. Within the reef skeleton live minute blue green algae. These give off oxygen which the coral polyps breathe; the algae, in turn absorb the carbon dioxide which the polyps give off, forming thus a genuine symbiotic relationship. Coral are multicoloured varying from gold to red, orange, green, brown and yellow The soft, living tube shaped coral polyp protects itself by forming a hard layer of calcium carbonate called the corallite. Colonies ofthese polyps form the structure of the coral reef growing in strange and exotic shapes that give the different varieties their popular names, such as brain coral, staghorn coral and elkhorn coral.

The reef needs two factors to survive - solar energy and chemical nutrients. The nutrients flow into the sea as plant and animal organic material from rivers and creeks on the mainland and on the caye itself The organic material is broken down into its chemical derivates by bacteria and other microorganisms, thus providing the nutrients necessary for reef growth.

The warm clear water off the coast of Belize, fed as it is by various mainland rivers and streams, form an excellent environment for the reef.

The entire island of Ambergris in fact probably resulted from the accumulation of coral fragments along with silt from the Rio Hondo. The report of the British Honduras Land Use Survey Team of l959 notes: "The connected chains of coral islands known as Ambergris Caye was formed from the accumulation of coral fragments...first as a shoal patch. These shoals tend to build up in long lines parallel to the coast of the mainland. It is thought that their orientation may be connected with submarine geological strata rather than being entirely the work of sea currents."

The preceeding article was excerpted from the book Ambergris Caye, Paradise With A Past, published by Cubola Productions of Benque Viejo del Carmen and written by the Honourable Glenn D. Godfrey, Area Representative from Belize Rural South. It is available in local bookstores.