We have a 2 hour layover to catch our short flight to Ambergris Caye. Does the internationall airport have a bar? If not, is there one located close by?
Tropic Air Suspends Service To Chetumal, Merida & San Pedro Sula, Honduras
Current requirements for private aircraft landing: I am planning a trip in a private airplane, a Piper Cherokee 180 four seat airplane with a total of four of us flying in. What are the current requiremts? Do you know if I can stop in Mexico to refue
Exit Fee
What is the duty on bottles of wine over and above the duty free limit?
Top 7 Nonstop Airlines and Flights to Belize
Travel Tips and Hints for the Belize International Airport
Can you fly from Ambergris Caye to Placencia, or do you have to go back to Belize City and drive down?
The Best Airlines in Belize
Flying from Belize City to San Pedro

How do i get to Belize and San Pedro by air?

Getting to San Pedro is easy as key lime pie, but it does require at least one stop along the way. There is no international air service direct to San Pedro’s little 3,000 foot airstrip. Several major airlines have daily direct flights from the United States and Central American gateways. All coordinated with European and Canadian connections to land at the Philip Goldson International Airport (PGIA) in Ladyville, which is 20 minutes away from Belize City. Connecting flights and land transfers from Guatemala, Cancun (Mexico) and other Central American countries can be arranged via regional and local airlines and bus companies. 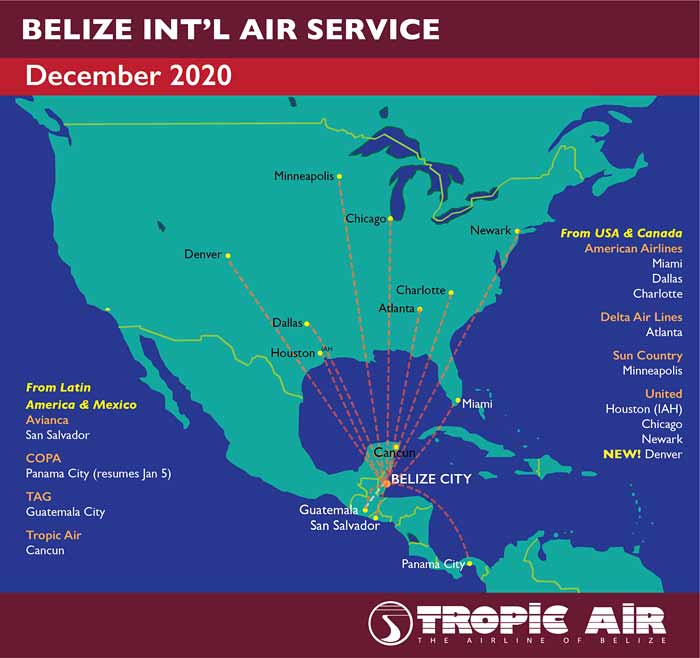 Occasionally there are charter flights to Belize from large U.S. and Canadian cities. International travelers fly into the newly renovated and expanded Philip Goldson International Airport in Belize City. From there, connections can be made to various destinations within Belize, including: Ambergris Caye, Caye Caulker, Corozal, Dangriga, Big Creek, Placencia and Punta Gorda; as well as to Mexico, Guatemala and Honduras. Charter flights can also be arranged to off-the-beaten track destinations as there are many private airstrips throughout the country. Belize’s International Airport also has nonstop service from San Pedro Sula, Honduras, Flores, Guatemala, and San Salvador, El Salvador.

Premier in Chetumal sometimes has flights from Cancun to Chetumal and vice-versa.

From Belize City, you can either fly or take a boat to San Pedro. By air, it’s a 20-minute flight; the boat trip takes about 75 minutes.

Coming in by air- The easiest method of travelling around Belize is by air. Two Belize airlines, Maya Island Air and Tropic Air, each have about one flight per hour every day to San Pedro, starting at around 7:30 a.m. and ending at 5:30 p.m. In peak visitor season, sometimes additional flights are added to accommodate demand. Flights originate from both the International Airport in Ladyville about 9 miles north of Belize City, where your TACA, United or American flight arrives, and Municipal Airport, a small airstrip in Belize City. In many cases the same Maya Island and Tropic flight picks up passengers at both airports, making the short hop between the two in a few minutes. 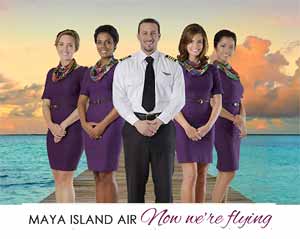 Should you fly to San Pedro from International or Municipal? Depends on whether you’d rather save time or money. It’s easier just to fly into International and walk over to the domestic terminal and catch your connecting puddle jumper. But you’ll save money, especially if traveling in a party of several people, by flying from Municipal. Adult and child one-way fares on both Maya Island and Tropic are approximately US$47 from International; from Municipal, adult one-way is US$26 and children under 12 are US$18. Round-trip fares are twice one-way. Rarely are there any bargain fares or discounts for advance booking.

Transferring between the airports requires a 20-minute taxi ride. A taxi from International to Municipal is US$17.50 for up to five passengers. A tip isn’t necessary unless the driver carries a lot of your luggage, in which case add a couple of bucks. Taxis -- they have green license tags -- are plentiful and await passengers just outside the main lobby.

A party of four will pay almost US$400 round-trip to San Pedro via International, and less than US$250 round-trip from Municipal, even including the taxi transfers. If the party has children under 12, the savings will be even greater.

Do you need to make reservations for Maya Island or Tropic flights in advance? Off-season, it’s not really necessary, though having a reservation won’t hurt. In-season, a reservation might save a wait, though more often than not flights are boarded on a first-come, first-served basis, regardless of reservation status. Most hotels on Ambergris Caye will arrange for your air travel to the island at the time you make your hotel reservations, and there’s usually no extra cost to you. The hotel gets a small commission from the airline.

You also can book direct with the airlines by telephone or over the Internet. Here’s contact information:

Tropic Air: 800-422-3435 or 501-226-2012; e-mail reservations@tropicair.com ; schedules and fares at ( http://www.TropicAir.com ).
International wholesale air is available from all U.S. departure cities through Belize Tradewinds.

After deplaning from your flight at Philip Goldson International Airport outside of Belize City, you will pass through Belize Immigration showing your passport and the immigration card you filled out on the airplane. Your baggage will come out on the belt. There are several porters to assist you with your bags. They will carry your luggage to the customs area for you. If you are handling your own luggage just proceed to customs. More often than not, a customs officer will open your bags, or ask you to do so. After clearing customs, go into the main terminal.

If you are dressed for cold weather, this is an opportunity to change into more comfortable clothing. (The dress code on Ambergris Caye is shorts, t-shirts, tropical blouses - shoes are optional). Only light clothing is required the year round nnd should preferably be washable. Light, informal tropical clothing is recommended except for hunting trips. For jungle excursions to the mainland, the thick forest growth and the possibility of insects should be taken into accounts

Most travel packages will include vouchers for flights to the island. There are two airlines that serve Ambergris Caye from International Airport; Tropic Air ( http://www.TropicAir.com ) and Maya Island Air ( http://www.mayaislandair.com ). Check your baggage and go to the departure lounge. Flights leave hourly and are scheduled to correspond with the arrival of the major carriers (TACA, American Airlines and United).

They fly into San Pedro until about 6:30 (there are lights now!). You can make a reservation but it is not really necessary. After clearing customs go into the main terminal and try for which ever airline you can get on the soonest. It is about $86 US return per person.

The flight from International takes around twenty minutes and is spectacular. Click here ( https://ambergriscaye.com/fieldguide/airguidea.html ) for a minute by minute list of what you will see while flying.... If you fly low enough, you can see the manta and sting rays and coral formations as you approach the island.

Visitors coming to Belize in private aircraft must obtain permission to land at the Belize International Airport from the Chief Civil Aviation Officer 48 hours before the scheduled time of landing. Pilots of private aircraft will have their documents inspected, and must file the normal flight plan. Landing fees are based on the weight of the aircraft and are charged per 1,000 lbs. Parking fees are also charged per 10,000 lbs.

San Pedro Airport
Both Maya Island Air and Tropic Air service terminals are situated at the North end of San Pedro Airport runway. The terminals face each other across the aircraft turn around. At this time it appears that Island is the most likely to be on schedule, especially during the busy time of the year, for a variety of reasons.

Tropic Air is the oldest Inter-Belize air service in this country. It also has a connection, via Philip Goldson International Airport with Tical in Guatemala. Both San Pedro Airport air carriers have regular daily flights to seven major destinations throughout Belize and "On-Demand" stops can be arranged at airstrips on island and resort hide aways scattered throughout the country and along the barrier reef.

According to Johnny Grief, chief pilot for Tropic Air, the latest runway extension is 60 feet wide by 2050 feet long. A temporary dirt strip has been made on the west side of the old airstrip, allowing planes to taxi to the new area for takeoff or return to the airline terminals after landing on the new section of airstrip.

The total runway length is 3500 feet with a 1500 feet overrun on 06( runway heading) and 500 feet overrun on 24.There is also a runway on the northern end of the island used by the Nova Shrimp Company and others, 2000 ft, long, however authorization is required from civil aviation prior to landing.

Private jets are not allowed to land in San Pedro. Jets are not neighborhood friendly.

Runway surface is not rated for more than 12,500 lb’s.
No parking.
No blast fences for acft turnaround.

Getting here from Mexico:

The cheapest way to get to Belize is usually not to fly to Belize but to fly to Cancun (or sometimes Cozumel/Playa del Carmen) and then bus from there. There are many charter flights into Cancun from the U.S., Canada and even Europe, often at fares that are one-third to one-half what they are into Belize. From Cancun or Playa del Carmen, you can take a bus to Chetumal (four and a half to six hours and US$15 or less for a nice, comfortable reserved seat, with air conditioning and videos).
Click here ( http://www.maps-of-mexico.com/quintana-roo-state-mexico/quintana-roo-state-mexico-map-main.htm ) for some awesome maps of the area of this route...

From Europe:
There are currently no direct or same-day connecting flights from Europe to Belize (and none that are planned at present). The most convenient route is via Miami or Houston with an overnight stay on the outbound leg only. Return flights from Belize connect with overnight flights from Miami and Houston to London and other European destinations.

British Airways has started direct flights from London to Cancun one day each week (Monday). Again, arrival time does not co-incide with flights from Cancun to Belize so an overnight here is necessary.

Belizean Airlines Offering In-Country Service:
Two Belize airlines, Maya Island Air and Tropic Air, have many flights daily to San Pedro from both Philip Goldson International Airport in Ladyville about 9 miles north of Belize City and Municipal Airport in Belize City. One-way fares are approximately US$23 from Municipal and US$44 from International, and twice that for round-trip. A taxi from International to Municipal is about US$15. Most hotels on Ambergris Caye will arrange for your air travel to the island at the time you make your hotel reservations.

3 people found this article helpful. What about you?