Can you tell me about the San Pedro airport and the runway there?
Flying from Belize to Cancun Mexico
Can you fly from Ambergris Caye to Placencia, or do you have to go back to Belize City and drive down?
10 travel tips to navigate the Belize International Airport
Do you know anything about private aviation in Belize? I’m planning to move down in the next couple years but hate to give up my small homebuilt.
Tips for Flying with Your Pet
Travel Tips and Hints for the Belize International Airport
Do you have any flights from Cancun to Belize?
Flying to Belize
getting through customs

With roughly 386 km of coastline, Belize’s waters are dotted with islands of all shapes and sizes. Of course, most of them remain undeveloped and inhabited only with our region’s rich flora and fauna. But nevertheless each of our little jewel islands are unique and there is no better way to view them than from high above the sky. Just from flying from Belize City to San Pedro Town you can get a good dose of island spotting. 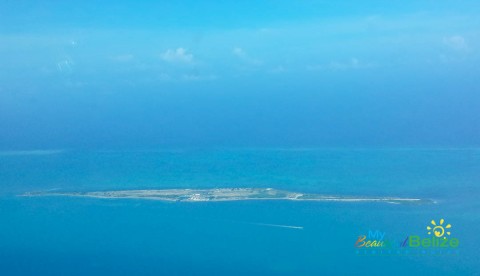 From way up in the sky it’s easy to marvel at all of nature’s creations. In a sea of blue, islands stand out with their bright greens. The four major islands that you can spot will flying to San Pedro town are St. George’s Caye, Caye Chapel, Caye Caulker and your final destination, Ambergris Caye!

With a population of less than 50 permanent residents, St. George’s Caye is only eight miles east of Belize City and is one of the first ones to be spotted from my short 15 minutes flight from Belize City to San Pedro onboard Tropic Air’s aircraft. But what it lacks in population, this tiny island makes it up in history and heritage. Previously known as Cayo Cosina, St. George’s Caye is synonymous for the Battle of St. George’s Caye which took place from September 3rd to the 10th in 1798. The battle saw the Baymen (British settlers) defending our home land from Spanish invaders.

The next island to be spotted is Caye Chapel. Located about 16 miles north-northeast of Belize City and only three miles south of Caye Caulker, Caye Chapel is a small privately owned island. The island was developed to be a luxury golf resort and marina and features an airstrip, 18-hole golf course, a club house and conference facilities. Retired professional Australian golfer, Greg Norman recently visited the island and is planning on working with developers to restore Caye Chapel to its golfing glory.

As I near my destination, the next island I spotted is one of my favorite playgrounds: Caye Caulker! Commonly known as La Isla Cariñosa, this island is located 20 miles north-northeast of Belize City and only a couple minutes from Ambergris Caye. Caye Caulker Village is a favorite destination for tourists who love its laid back atmosphere and friendly people. To me what really makes Caye Caulker so special is The Split that separates southern and northern Caye Caulker. The Split is a great place to hang out with friends, sip on a couple cold drinks and of course take a dip in the azure waters of the Caribbean Sea.

And my final destination is home base: Ambergris Caye! The largest inhabited island in Belize, Ambergris Caye is about 25 miles long and one mile wide. The center of life in Ambergris Caye is San Pedro Town which is flocked by thousands of tourists each year. Ambergris Caye also features great views of Belize’s Barrier Reef and snorkeling at some of the country’s top sites such as Hol Chan Marine Reserve, Shark Ray Alley and Mexico Rock. My home town is truly the best, there is never a dull moment here! From shopping to dining and even clubbing, San Pedro Town has it all!

Oh! How I love seeing my country’s best from high above. Next time you’re flying anywhere within Belize be sure to take a peek through your window. You never know what you might see!</

Click here for more photographs and some videos, along with more information on what you see on this flight.